A Short History of The Band 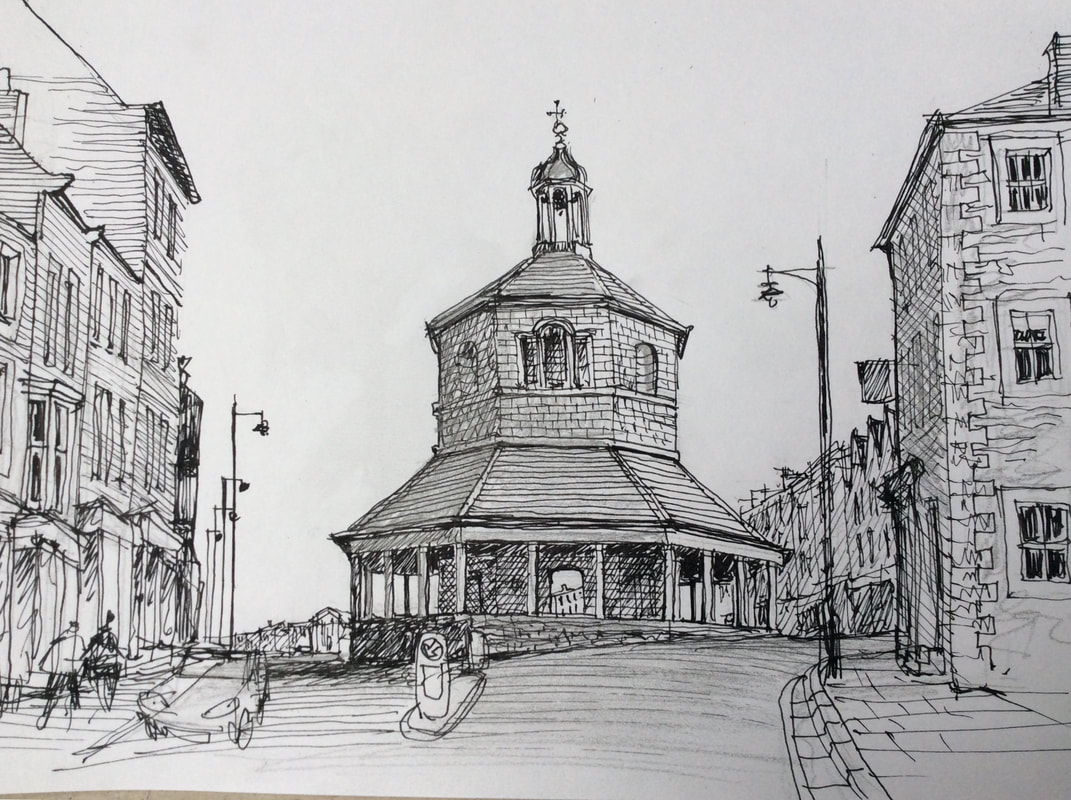 In common with many brass bands the exact date of the founding of the band is a little hard to pin down.
What does seem certain is that the band arose out of the remnants of the South Durham Militia band that was founded in 1759. It is astonishing to note that the first musical director was a youthful William Herchell (who later went on to become Astronomer Royal and discovered the planet Uranus!). The first Militias fell away by about 1815 but some of the ex members will have learned some music and a town band of some sort arose from that.
There is evidence from newspaper reports. That a town band played at the opening of the Whorlton Bridge over the River Tees in 1829 but we have no record of the instrumentation and it is likely that this was a wind band or a mixture of wind and brass instruments in the style of the military bands of the time.
The earliest date for a brass band is a record of a concert at Raby Castle in 1857, an event that predates the date of 1860 that has traditionally been held to be the date of the band’s formation.
The earliest image of a civilian band in the town at the photograph sent to us by a lady in Australia of her grandfather’s band in Barnard Castle which we suspect comes from around the 1890’s. 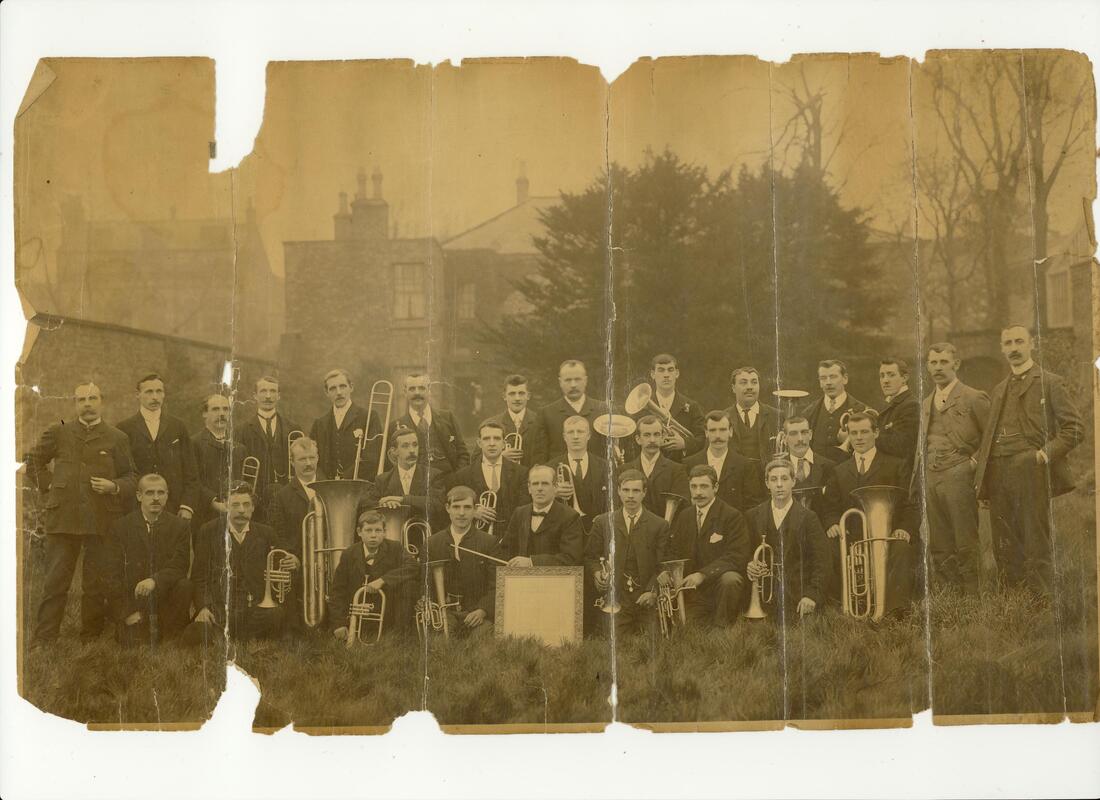 The next image must come from just after WW1 and shows the band at the splendid bandstand at the Bowes Museum in the town. Sadly the bandstand was demolished in the 1950s.
​ 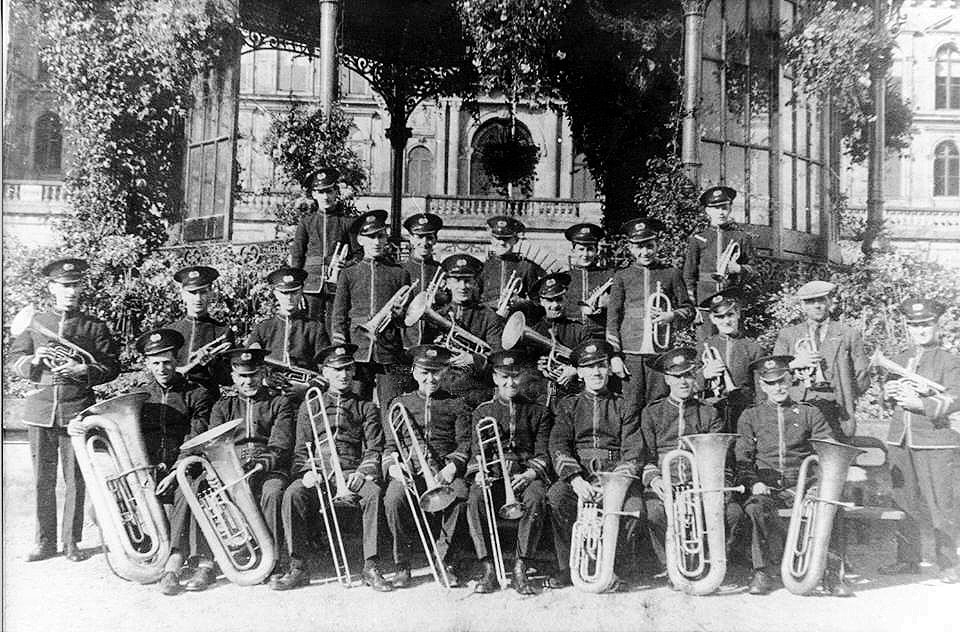 ​
At some time in the 1890/s the band folds.
A great effort to reinstate the band and a public subscription saw the band flourish again in 1900 with Mr J Bainbridge wilding the baton. This incarnation of the band was short lived and by 1910 that band had again ceased to exist.
Band instruments were lent out to the Durham Light Infantry during WW1 and a reformed band under Mr Smith appears again in 1919.
A period of relative success seems to have ensued with Mr Maurice Wright ( a very long serving member) taking over the baton in 1936.
As is to be expected, the band ceased to operate in WW2 but by 1949 had been reconstituted with Maurice wright back in charge.
By the 1950’s the band was thriving and having some success in competitions. The Wright family played a big part in the band at this time and at one time there were nine members of the same family in the band.  The following image is of some of the members of that family at the time.
​In 1960 the band celebrated what they assumed was  their 100th birthday and each member was awarded a medal with their name on it. 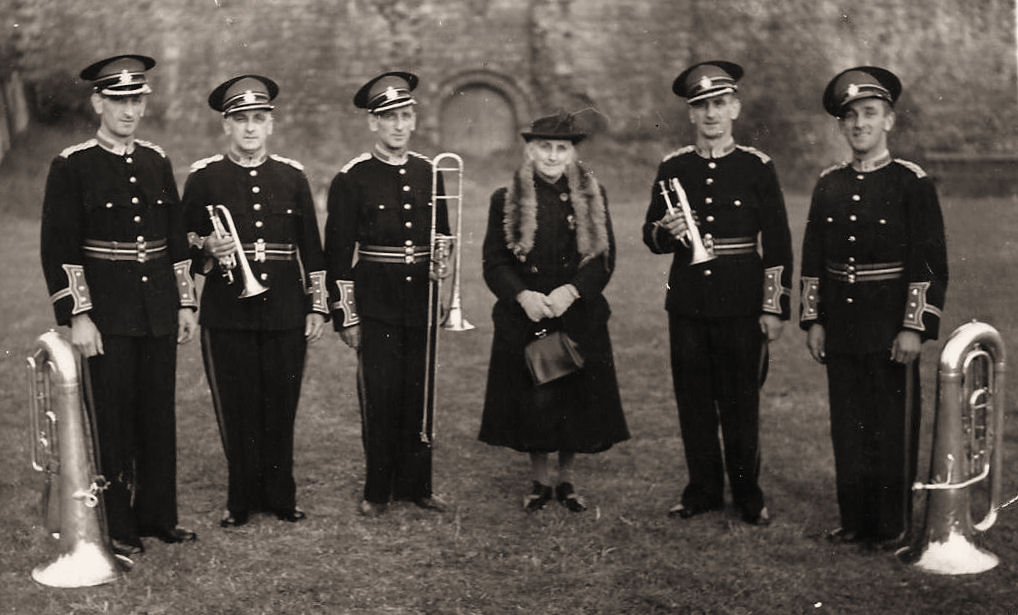 By 1967 however there were only six members of the band left and the band once more went into abeyance.

Yet another reincarnation took place in 1973 with another member of the Wright family (Trevor) conducting.

In 1974 Peter Hartley took the baton and led the band through an era of success in competitions , twice reaching competition finals in London.

In 1977 to celebrate the Queens Silver Jubilee Cyril Beere the secretary of the band (and Personnel Director of Rothmans at Darlington) was persuaded to run a “one off” entertainment competition for Championship section bands at the Beehive Centre at Rothmans. This “Brass in Concert” was such a success that it was moved first to the Dolphin Centre, then to the Spennymore Leisure Centre, and finally to the Sage at Gateshead where it has now become one of the premier entertainment contests in the World. The band retains links with this event to this day with band members acting as  stewards.
The association with Brass in Concert led to other things and was responsible for a connection with Goff Richards the famous Cornish composer who was persuaded to write a signature march for the band the “Barnard Castle March” which was first played in public at the reopening of the Witham Theatre in 1981.
Peter Hartley died in 1980 at the age of 47 and will always be remembered as one of the greats of Barnard Castle Band.
​The  following image shows the band in 1975

And another image this time from 1982

In the early part of the 1990’s the musical direction was taken up by Gary Hutchinson who was one of the original members of the 1973 re-formed band. The first fruits of the bands new endeavours were born in 1992 when the band achieved National Brass Band League Section 4 Regional Champions and Section D Durham League Champions status.​
This success led to the band qualifying for the National Finals in London.1993 saw a similar picture of success in the National and Durham League competitions which resulted in the band being promoted into the National and Durham League 3rd Section. Adding to 1993's honours was the George Allen Entertainment competition trophy.
As a result of continued success in major competitions in 1994, which included being placed 1st. in the Murton Colliery Entertainment Contest, the band won further promotion to the National Brass Band League Section 2 and Section C in the Durham League.

Given that the band had risen from Section 4 to Section 2 in only two years it was all the more remarkable when the band was placed 3rd in the 1995 National League Area contest lead to the band being promoted to the National League 1st Section in 1996.

Confidence high, the band entered the 1996 Durham League Championship with only one aim - to win. And win we did with a 2 point margin, taking along the way "Best Principal Cornet, Best Euphonium and Best Bass Section".
Promotion followed to Section B in the Durham League.

Hard on the heels of the Durham League came the 1996 National Area Contest. This was to be a severe challenge to the band playing Gilbert Vintners former Championship test piece "Spectrum". A creditable mid table result confirmed the Barnard Castle Band as a worthy 1st Section band.

A long overdue change of uniform to short black jackets with gold epaulets and black trousers was made possible by the generosity of the Watson family of The Jersey Farm Hotel & Restaurant.

2002. and the age old curse of brass bands struck again as Gary Hutchinson the Musical Director had to relinquish his position due to relocation within his company and a number of key young players disappeared to university and careers.

The band managed to fulfill engagements using players borrowed from other bands but were unable to compete in the Area Contests and as a result the band slipped from the First Section to the Fourth Section.

Ronnie Henderson died in October 2004 and will be fondly remembered by many young musicians in the area.

In March 2005 Louis Johnson the bands chairman who, like Ronnie Henderson, had been involved in the reforming of the band in 1973 passed away.
Having carried the Bass Drum on every parade for thirty years Louis had been the driving force of the band.

In April Gary Hutchinson returned to the area to take up the role of Musical Director again and in May along with Broughtons Brass, Stanhope Silver and Ferryhill Town, the band recorded tracks for the Brass Band Aid CD to raise funds for the World Vision Charity.

The loss of young players to university and work commitments has over recent years led to the band having to rely on our friends from the military bands based at Catterick to fill seats. But the uncertainty of their availability to fullfill engagements has made it impossible for the band to compete in either the Durham or National Leagues.

The band has been grateful to a number of conductors over the past years, each in their own way have helped to shape and develop the band along the road of improvement.

In 2008 Ian Symonds, the musical director of the Barnard Castle Youth Band, took over the baton of the senior band effectively merging both bands and once again the process of re-building the band commenced.

In the last few years the inimitable Andrew Nicholson took over the baton and the band has seen an upsurge in its fortunes with a big increase in membership and players prepared to travel big distances to be a part of something special.

For those who want a much fuller version of the history of the band we have produced a small book a copy of which may be had from our treasurer for £8 plus £2 postage and packing.(See contacts tab)
We are always looking for more evidence from the past. If you have photographs or other information you feel we might be interested in please get in touch.